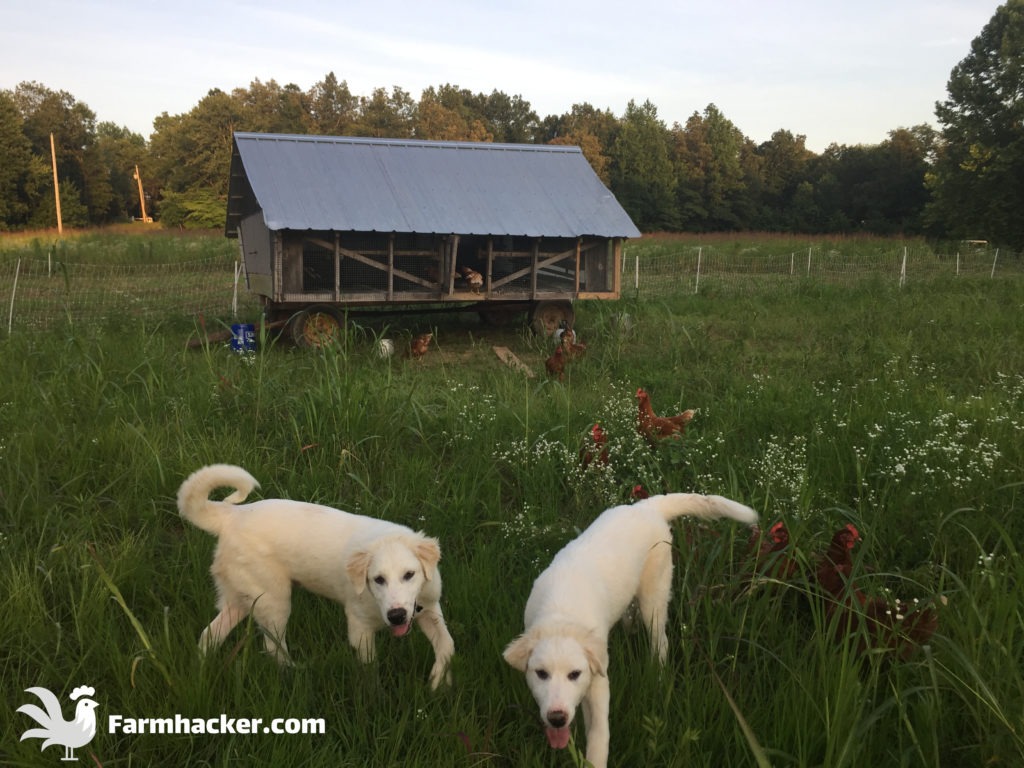 This is Bella and Carl. These are Great Pyrenees Livestock Guardian dogs. They live with our chickens and they protect them. Since having them, we’ve never lost a single chicken to a predator. They make raising chickens a lot more easy on our farm.

3 Considerations Before Getting Great Pyrenees

Before you move forward with getting your own Great Pyrenees to guard your chickens, here are some considerations that you should keep in mind.

They Bark a Lot

Our Great Pyrenees are some of the sweetest dogs I’ve ever owned. They will bark at strangers but I’ve never felt like they would bite a stranger.

And yes, they bark a lot. This is one their defense mechanisms and it helps them do a good job at keeping predators away.

Since we raise our chickens on pasture, our dogs are typically not close enough to to the house that their bark bothers us.

But if yours will be close to your house, consider that they might wake you up at night with their bark.

They are also large dogs. And because they are so large, they can knock you around and knock kids over.

This is not intentional, it’s just because they are so big.

Out toddler doesn’t like being around them because they are almost the same height. And they like to lick her and unintentionally bump her around.

Keep this in mind if you have small children.

They May Wonder Off

If they are not fenced in, they do tend to wander around the farm and sometimes off the farm.

We almost always kept ours fenced in. However, when we’ve let ours out, they would sometimes wonder off and we wouldn’t see them for hours. One time they were gone for an entire day.

Because of this, we had to be very careful about letting them free range.

If you are ok with all of this and you want to move forward with getting your own Great Pyrenees livestock guardian dogs, here are 5 tips on training Great Pyrenees to guard chickens. 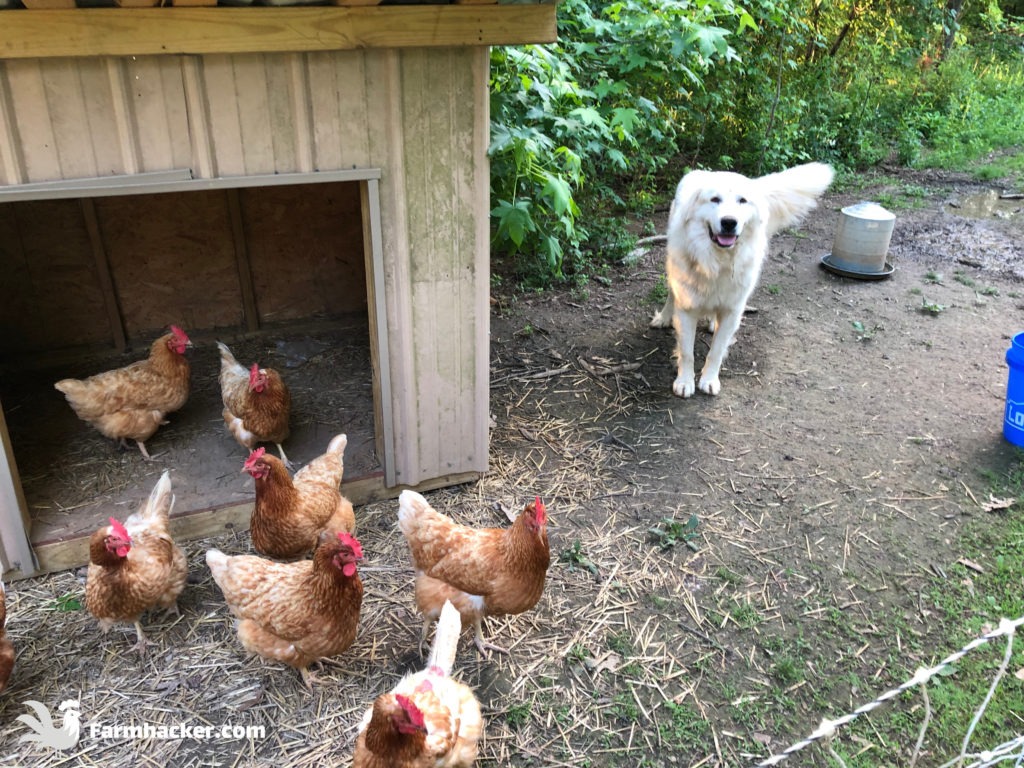 1. Get Great Pyrenees as Puppies

If you’re thinking about getting Great Pyrenees livestock guardian dogs to protect your chickens, make sure you get them as puppies before you put them with your chickens.

A full grown Great Pyrenees is harder to train than a puppy. If you put them with chickens then they might see them as food rather than another animal to guard.

Raising them as puppies with chickens allow them to assimilate with the chickens and learn not to attack them.

And puppies are far less likely to hurt a chicken while being trained verses a full grown Great Pyrenees.

2. Get Two Great Pyrenees Instead of One

If you’re going to get Great Pyrenees to guard your chickens, I highly recommend getting two instead of just one.

If you have two, they are more likely to play with each other instead of the chickens.

Also, having two helps keep them from being lonely while out with your chickens.

3. Discipline Them When They Play With the Chickens

A stern “No” is pretty much all you need to do to get them to stop.

They need to learn very early on that playing with the chickens is not ok.

4. Give Them Lots of Room

Great Pyrenees are big dogs. And because they are so big, they need lots of room.

Giving them room to run helps them to exercise while they are growing.

On our farm, we make very big paddocks with our pastured poultry netting so our dogs and chickens have lots of room.

They thrive in large fenced in areas where they have room to run. So if you are thinking about putting yours in a chicken run or small area, I would dissuade you from getting Great Pyrenees.

Feeding Great Pyrenees that are living with chickens can be tricky because chickens love dog food.

The way we handle it is to feed the chickens in one area and then feed the dogs in another.

As they get older, they get better at keeping the chickens away from their food.

Watch the 360 Video of Our Great Pyrenees

I hope these tips were helpful. Please post any questions in the comments or any additional tips you may have.

How to Make Money Selling Eggs on Your Small Farm