Back in 2012, I helped out on a sustainable farm that sold pastured chicken eggs. During the winter, the farmer would move the chickens into a greenhouse to keep them out of the harsh winter weather.

In the greenhouse, the farmer would also create several layers of compost on the floor where the chickens were.

The combination of the chickens and the compost would create a very warm greenhouse. In fact, it was so warm that I would have to take off my coat because I would start sweating while inside.

And since the chickens stayed warm, they laid more eggs than they would if they were out in the cold.

In the following article I want to share his system with you so you can recreate it on your farm while raising your own chickens.

Creating Heat With Chickens and Compost

Chickens, like all other warm blooded animals, produce body heat. Their body temperature is actually around 106 degrees Fahrenheit which makes them a lot warmer than humans. They are like mini space heaters.

As compost breaks down, it also creates heat. This is especially true if you are continually adding to it and turning it.

Compost also creates a great habitat for things that chickens like to eat like worms and bugs. Chickens will instinctively scratch the compost while looking for food which helps stir it up.

The combination of chickens and compost can be a great way to add heat to your greenhouse.

Preparing the Greenhouse for Chickens

Just like a chicken coop, you’ll need to add a few things to your greenhouse to make it hospitable for your chickens. 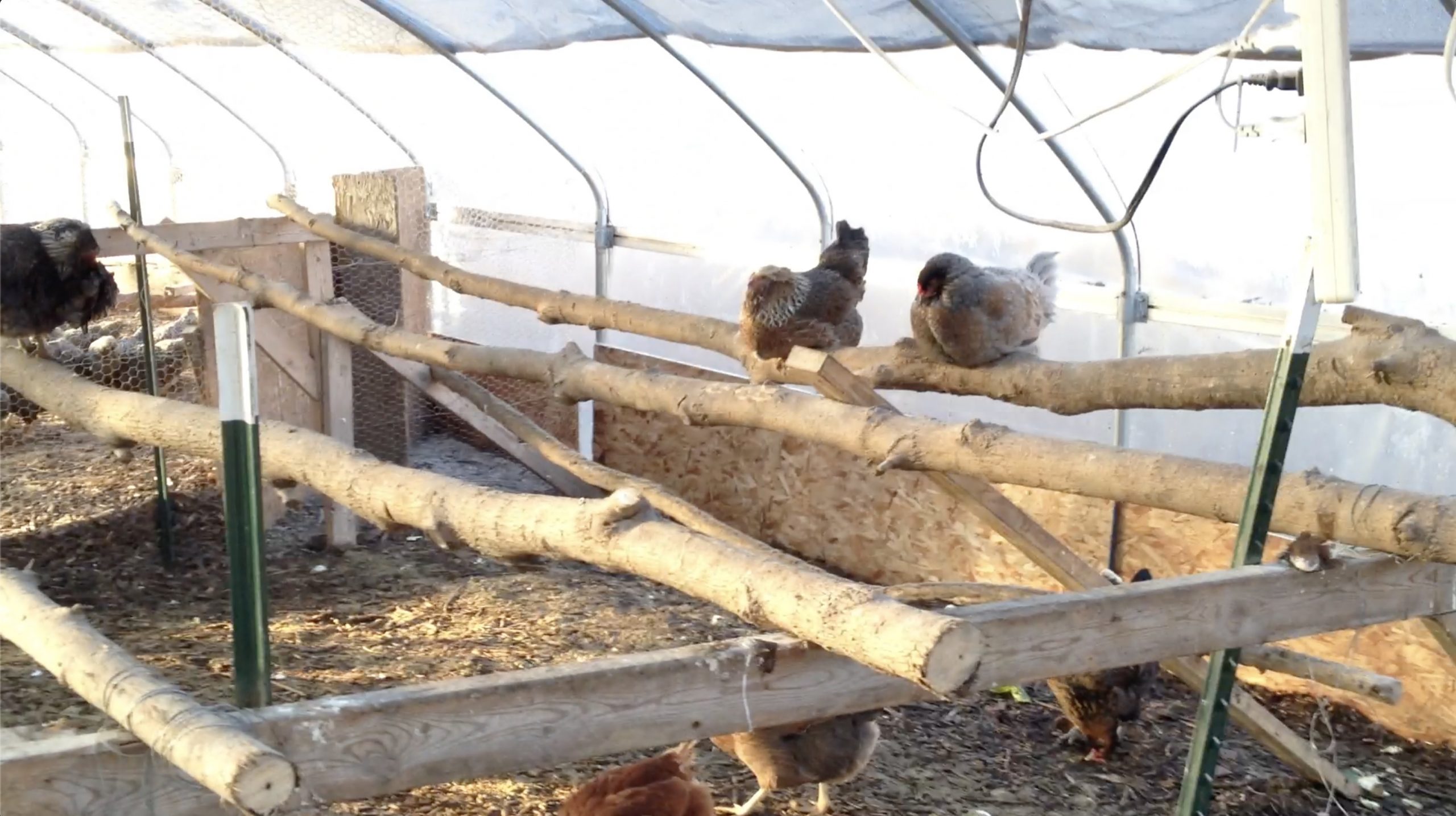 The first thing you’ll need to add are roosts. As you can see in the picture above, these are made of tree branches or tree trunks from small trees. 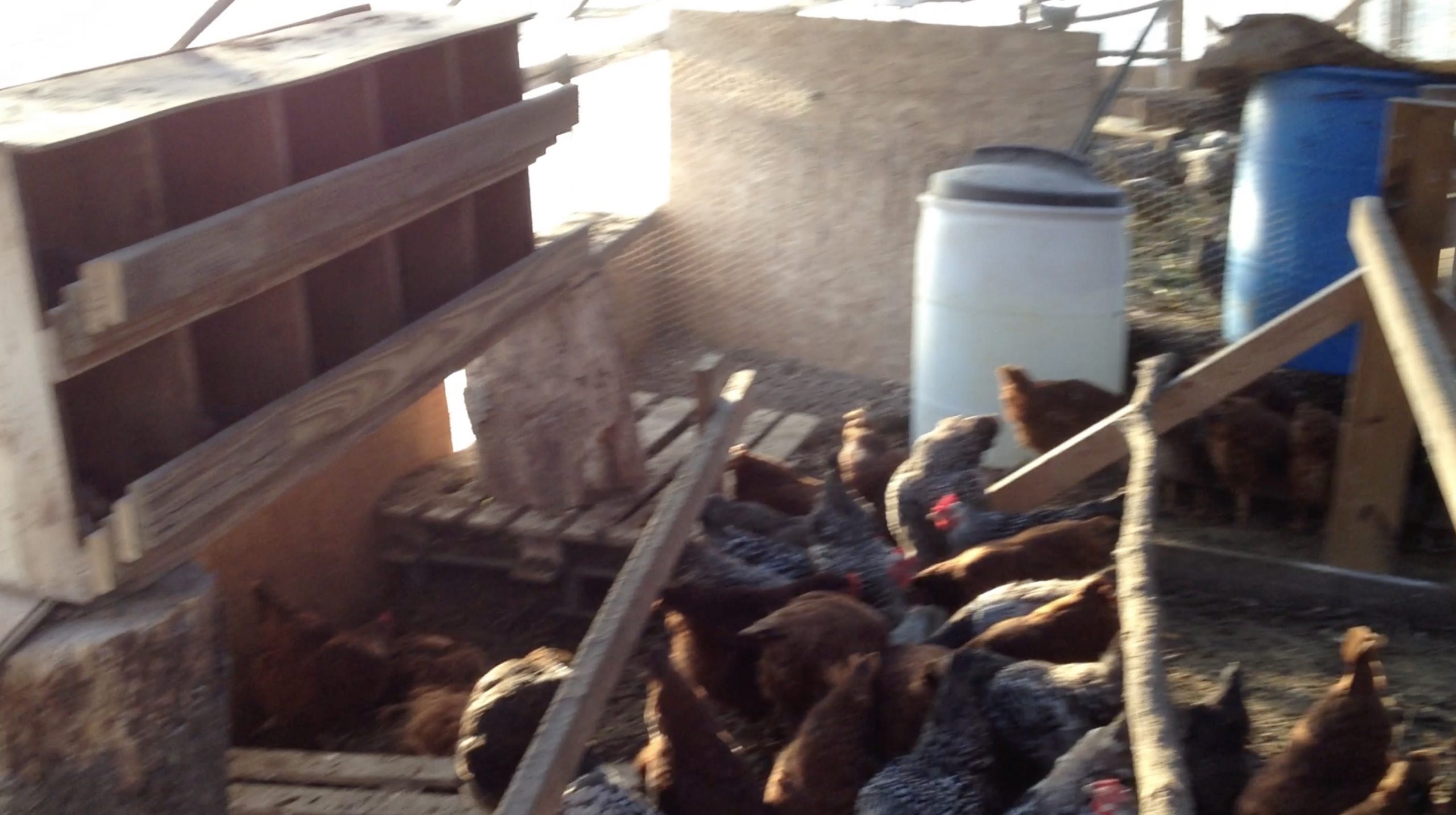 The next thing you’ll need is egg boxes so your chickens can lay. The egg boxes here are built out of plywood.

It’s also a good idea to add chicken wire against the walls to keep the chickens off of the plastic covering.

You will only set this up in half of your greenhouse if you want to use the other half for growing plants. Simply install a chicken wire barrier in the middle to keep the chickens on one side of the greenhouse but let heat through to the other side.

After you have built all of this out, you are ready to add your chickens.

Creating Compost in Your Greenhouse

Although there is a science to creating good compost, you don’t have to worry so much about that in this situation.

In order to keep it simple, think of it as mixing browns (carbon) with greens (nitrogen).

The way we did this was to get several loads of wood chips (carbon) delivered by local tree trimming companies that were needing a place to dump it.

We would dump bucket loads of these wood chips on the floor of the greenhouse and then spread it out with garden rakes and pitch forks. The chickens would simply move out of the way while we were spreading it out.

The nitrogen was added two ways. The first and biggest way was from the chickens going to the bathroom on the wood chips underneath of them. Chicken manure is very high in nitrogen. 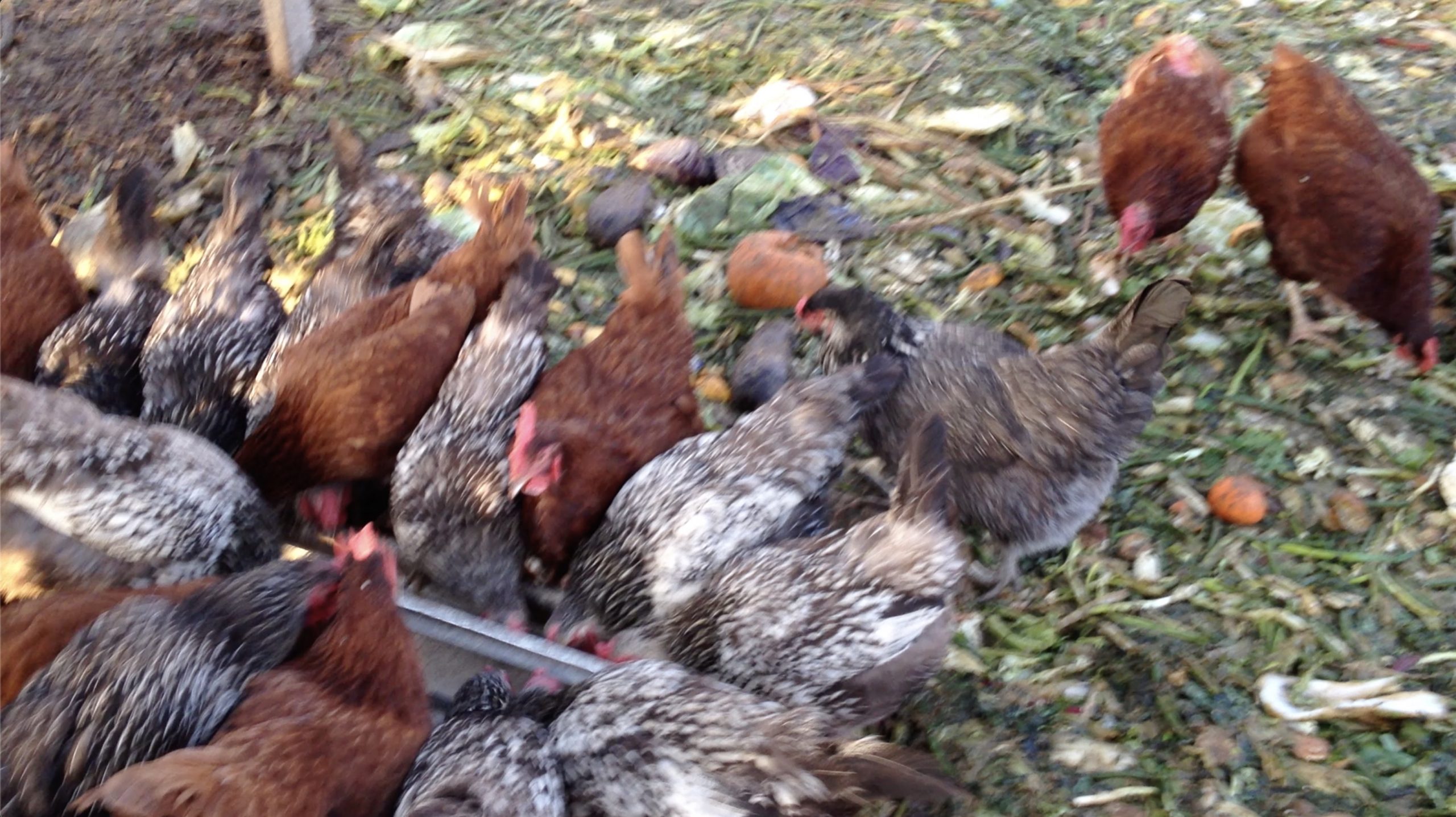 The second way was by adding produce that was being thrown out from a local grocery store.

We would pick this up from the grocery every week and throw it in with the chickens. The chickens would eat what they wanted from the produce and the rest would get mixed into the wood chips. You can see it in the pictures above.

Once the compost started to have a nitrogen smell to it, we would simply add another layer of wood chips to balance it out.

Over the course of the winter, we built about 2 feet of compost under the chickens. 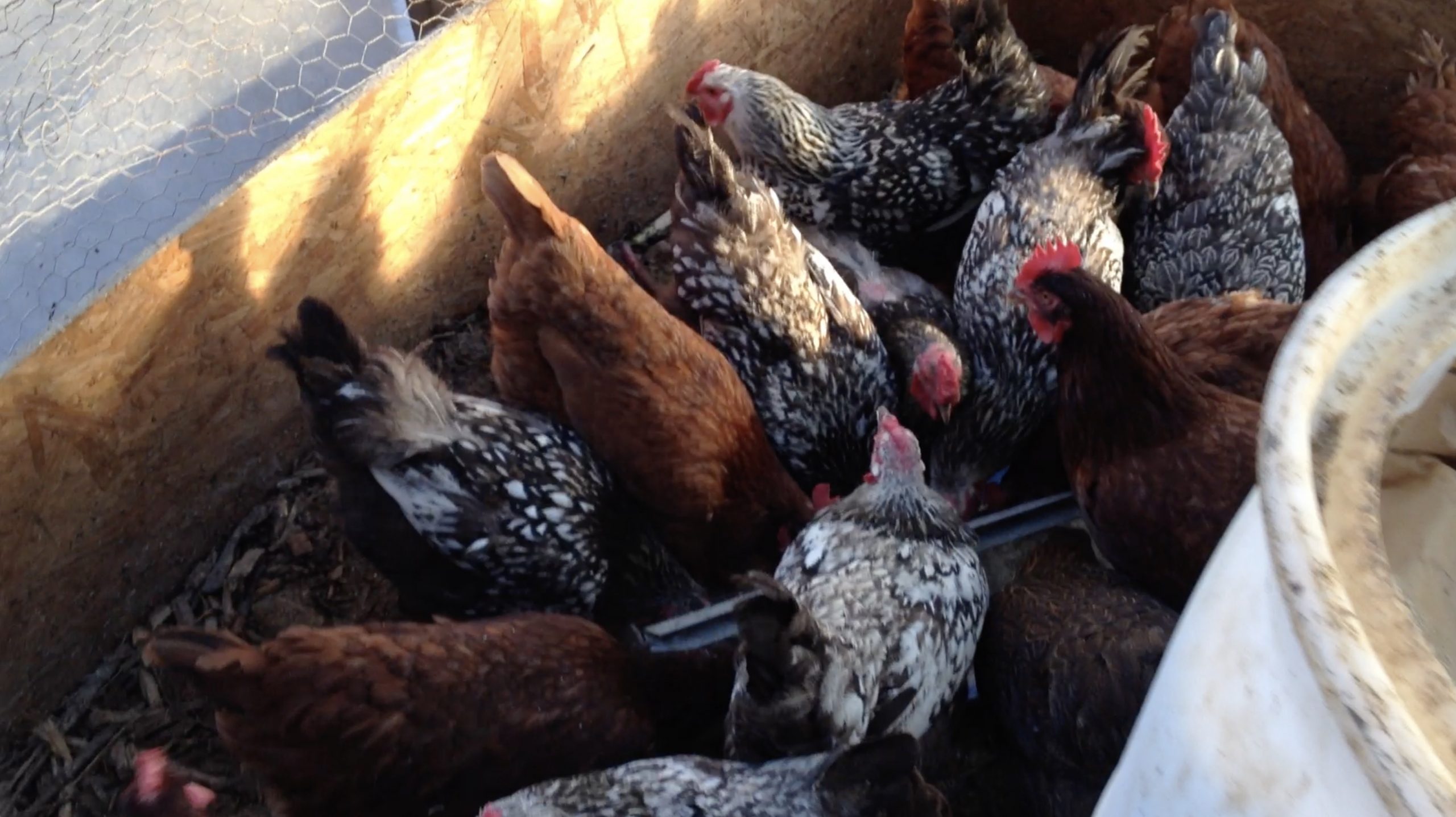 In order to keep the layers of compost from pressing against the greenhouse plastic, you will need to add plywood inside the greenhouse around the parameter.  You can see this in the pictures above.

Once it starts to heat up, you can start adding plants to the other side of the greenhouse. Again, make sure you add a chicken wire barrier in the middle to keep the chickens from getting into your plants.

Once winter was over, the farmer would move the chickens back out on pasture. This would leave him with layers of awesome compost that could be repurposed.

He would then add this compost to his tomato plants out in his garden. The tomatoes loved it.

The 2 Best Chicken Killing Cones in 2023

The 5 Best Heated Chicken Waterers in 2023