Here is curated list of organic farming statistics and organic agriculture statistics in the USA and worldwide. In this article you will find answers to questions like which states have the most organic farms, what demographics make up organic farmers, what are the most popular organic farm products, how many people eat organic food, and more.

What is Organic Farming?

Organic farming can be defined as a type of agriculture that is more sustainable than traditional farming methods. Organic farms are generally thought to be safer for the environment and healthier for the people who eat the food produced by organic farming because they analyze their farm practices with what is called an “ecological balance”.

Organic farming has been a rising trend in the US in the past few decades. However, organic farming is more expensive than traditional farming because it requires more attention to detail and also spends more time on developing sustainable growing methods while still meeting farmers’ economic goals.

It takes almost twice as much time for farmers to actually get a crop out of their farm to the market. However, the extra time spent on caring for the product and environment can be worth it

If you’re looking to start your own organic farm, here are some interesting facts and statistics about organic farming in the US:

Organic Farms and Farmers Statistics in the US 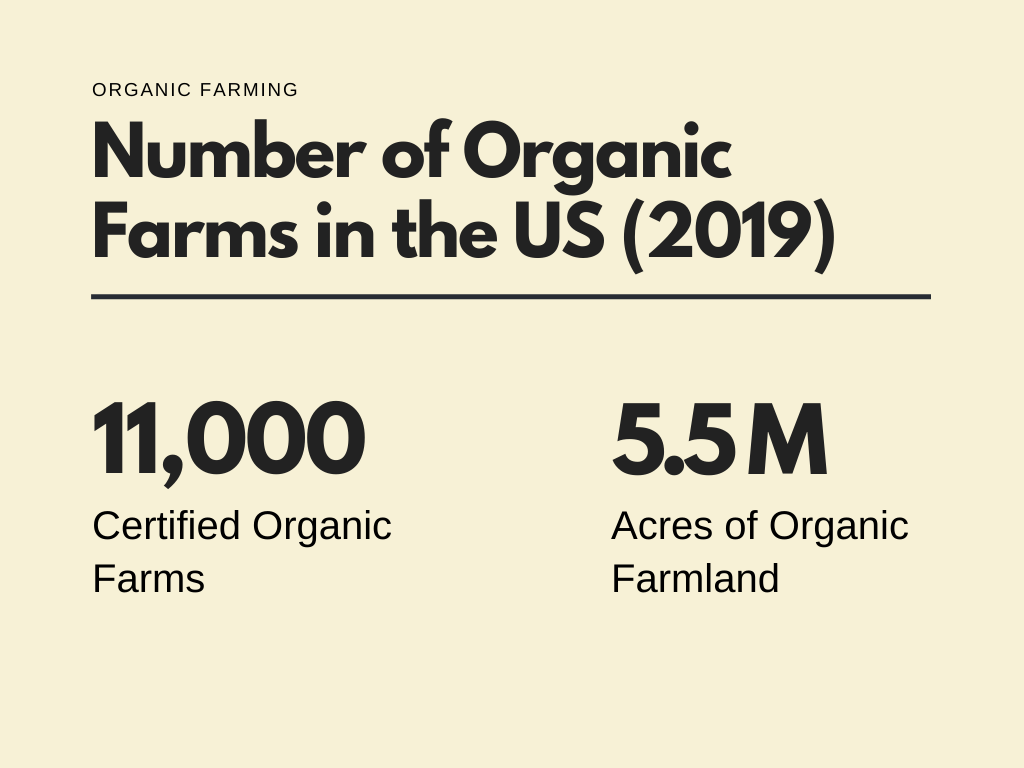 The second largest number is from Wisconsin, with 1,276 organic farms followed by New York which had 1,058 organic farms. These are the only three states that had more than 1000 organic farms in 2016. 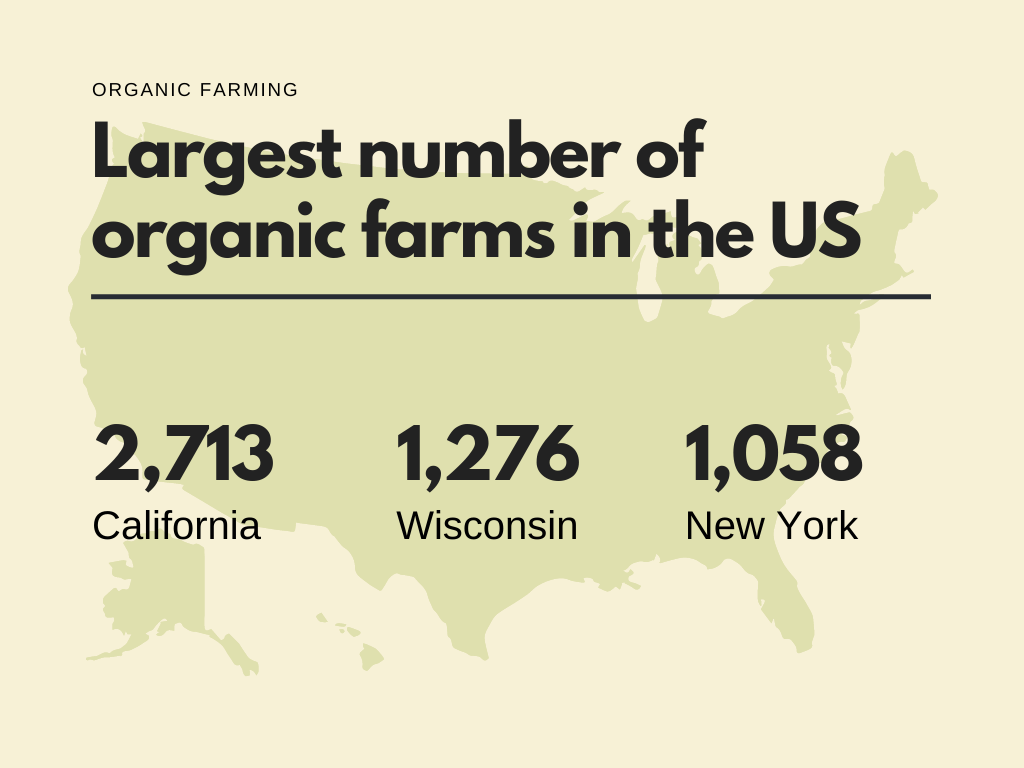 The southern states in the US have seen the most growth in the number of organic farms in the past years compared to other states, with the largest at 540% in the state of Arkansas which only had 10 organic farms in 2011, which then grew to 64 in 2016.

The states of Alabama, South Carolina, and Missouri also saw dramatic growth in organic farms as well with a high rate of increase of as much as 200%. 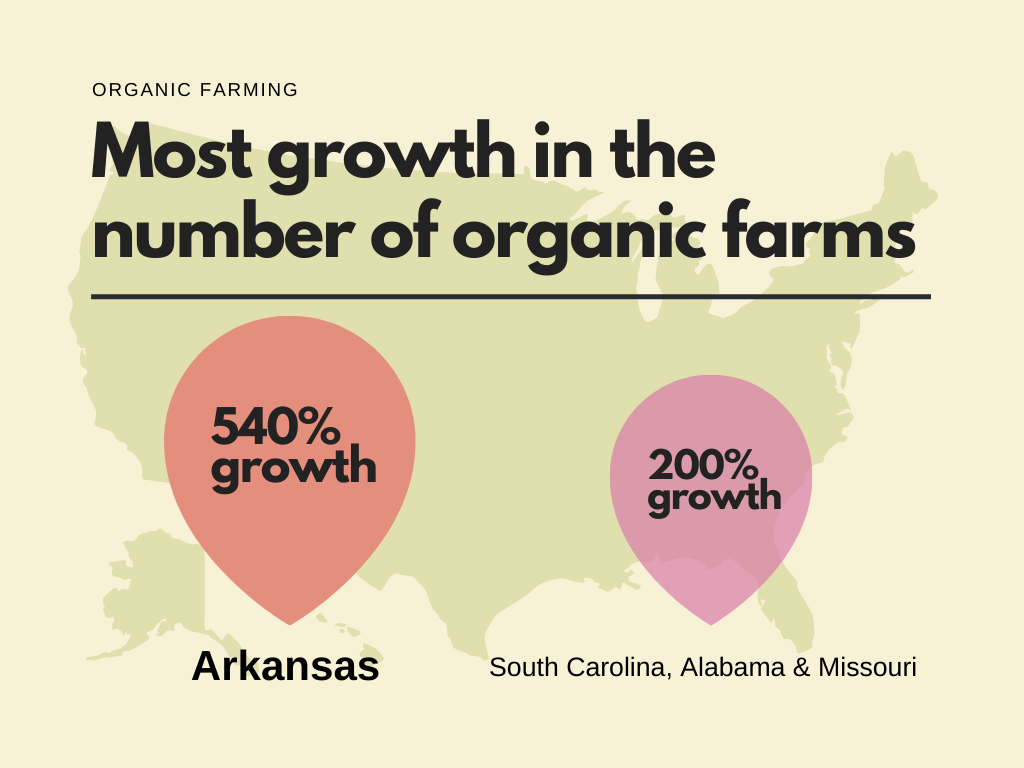 With the rise of organic farmlands in the US, it’s no surprise that organic food production has also significantly increased in recent years. And people are becoming more conscious of their health and the effects that food has on their body.

According to Pew Research back in 2016, 4 out of 10 adults in the US say they are eating mostly organic food, and 3 out of 4 adults say that they purchased organic food because they believe organic food is healthier than other types of food. Unsurprisingly, millennials lead the majority of US consumers in eating organic food. 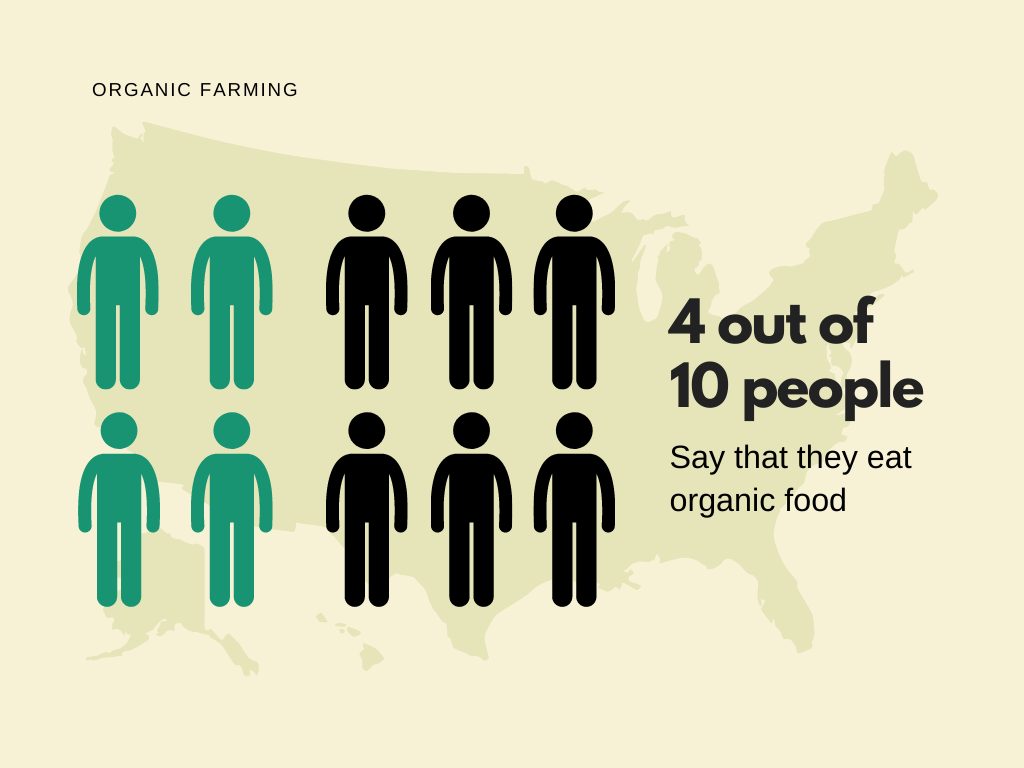 In a statistical report from Statista, Organic food sales had risen significantly from $13.5 billion in 2005 to $54 billion in 2020. It is also expected to continue to rise exponentially in the next few years where many consumers are looking for organic, natural, and locally grown foods because of their health benefits.

But despite the huge amount of sales in 2020, organic food only makes up 5.8% of all food sales in the US. But comparing that to 3.1% back in 2008, we can say that the number of sales are slowly, but surely, increasing. 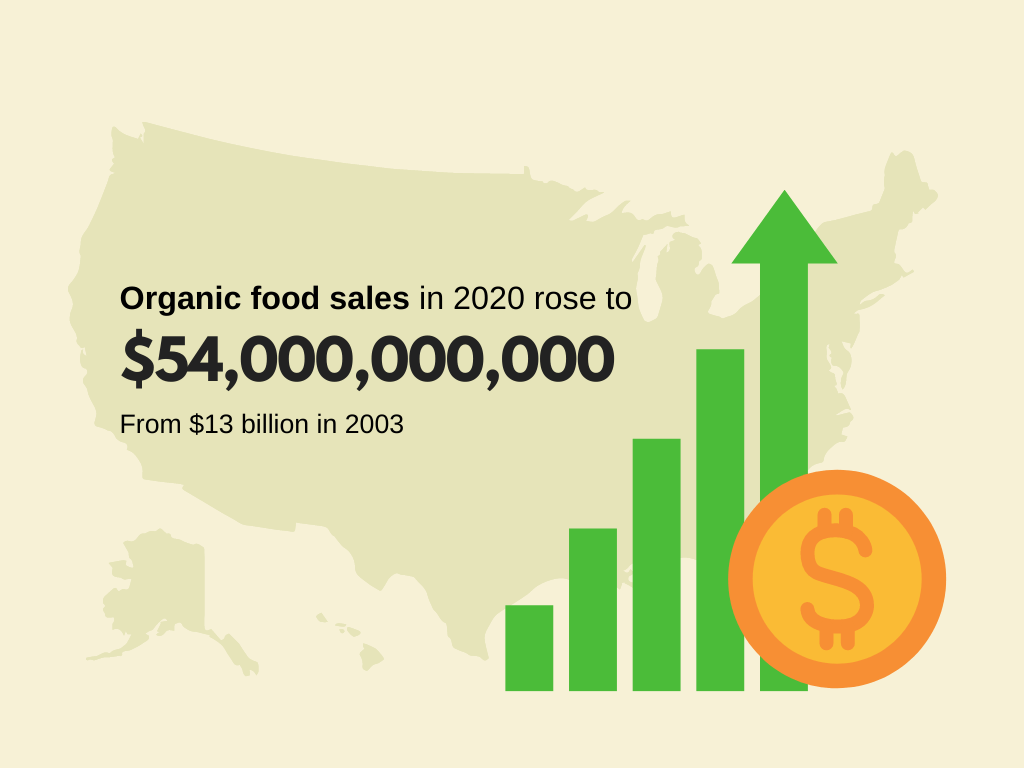 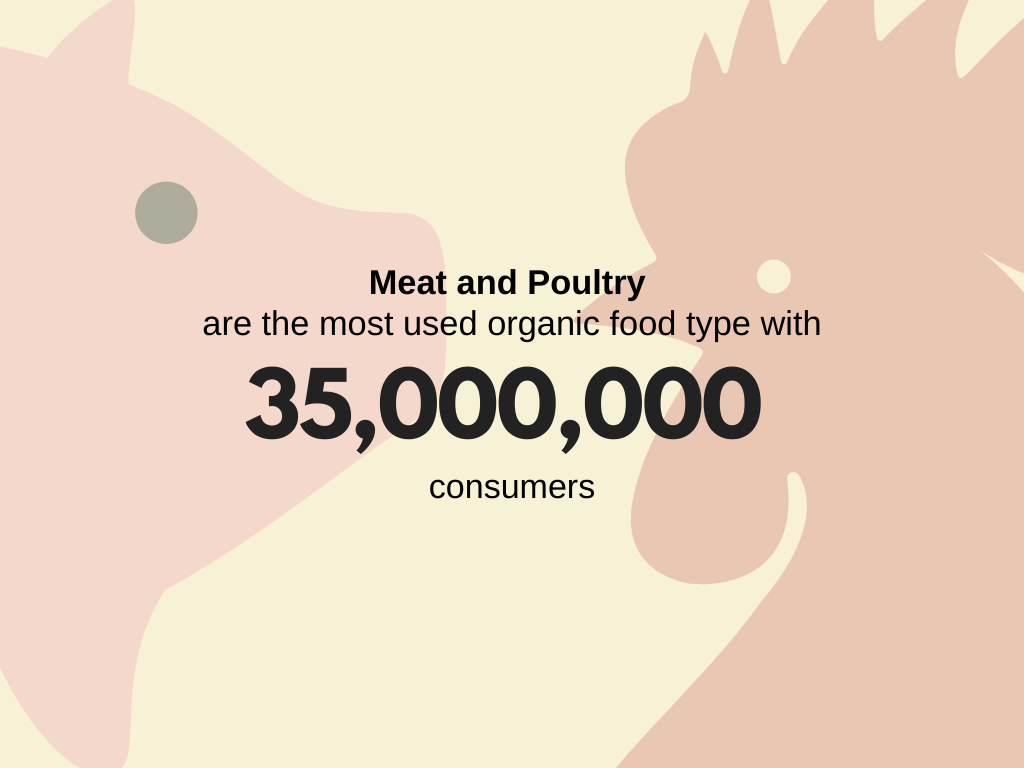 Organic farmers and producers nowadays are becoming younger in terms of age and experience. The Sustainability Alliance had reported that 26% of organic producers are under 45 years old.

Meanwhile, 27% of all organic producers have less than 10 years of experience . This is different from previous years where organic farmers are usually older and have more experience in farming.

Organic Farming’s Impact on the Environment

Organic farming and agriculture is a huge boon to the environment because of its sustainable and natural practices. Organic farming methods reduce non-renewable energy use, reduce greenhouse gas emissions, minimize pollution, and preserve biodiversity.

The use of GMOs is prohibited in organic farming since these modified crops are associated with chemical toxins. Instead, they use natural methods of pest control and weed management to produce food without the use of chemicals or genetic modification.

As a result, organic farms emit 18% less greenhouse gas emissions compared to conventional farms. And compared to organic farming, the production of non-organic crops requires the use of much more energy in order to produce pesticides and fertilizers.

Organic farming also preserves biodiversity by promoting sustainable agriculture practices that reduce pollution and preserve natural resources instead of using them up. This includes using earthworms, insects, and other natural, non-toxic ways of controlling pests and weeds that help protect the soil and prevent pesticides from entering rivers and lakes.

As a result, organic farms have 30% more species of birds, mammals, amphibians, and reptiles that live on them, and 50% more pollinators than traditional farms.

Organic farms are also reported to sequester 26% more carbon from the atmosphere and store it in the soil, which further helps reduce greenhouse gas emissions that contribute to climate change.

The Food and Agriculture Organization of the United Nations had published a report in 2021 stating that there are 72.3 million hectares of organic farmland throughout the world. This makes up to 1.5% of land used for agriculture in the whole world. 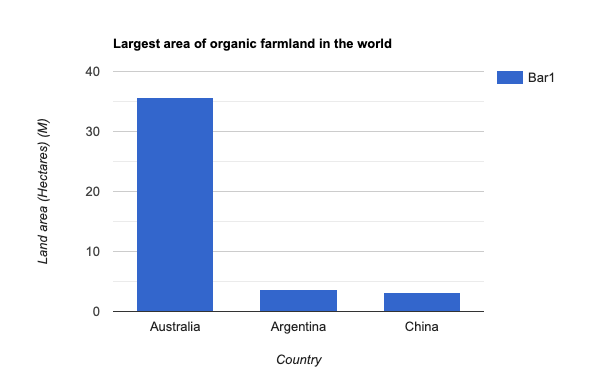 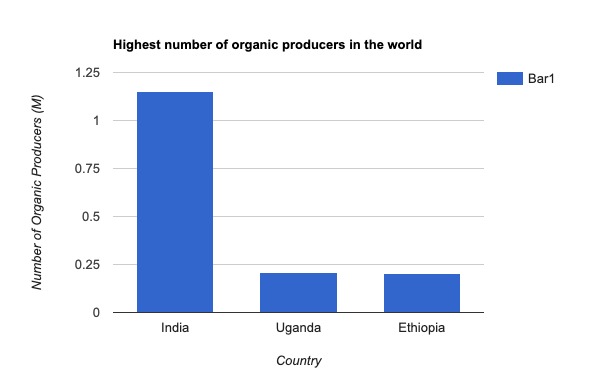 Organic farming is a great way to support the environment and protect it from further harm. It comes with many benefits, including how it reduces greenhouse gas emissions, preserves biodiversity, increases soil fertility, enforces sustainability practices that reduce energy usage, etc.

Organic farming also leads to more sustainable agricultural practices among producers. And since organic foods are grown without using chemicals, GMOs, or irradiation, people benefit from the high quality that comes with it.

How to Start Farming Completely From Scratch (2023 Guide)

Farm Names: How to Choose the Best One + 51 Examples